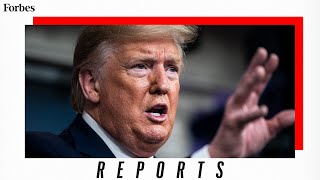 Why Trump Is Still A Billionaire Even With Debt | Forbes

“Is Donald Trump really a billionaire?” everyone seemed to be asking after the New York Times dropped a bombshell report about the president’s taxes, which detailed big losses in some years and limited income in others. The answer: Yes, he is indeed. In fact, Trump is a multibillionaire, worth $2.5 billion, by our count. His portfolio, which includes commercial buildings, golf properties and branding businesses, is worth an estimated $3.66 billion before debt. The president has a fair amount of leverage—adding up to a roughly $1.13 billion—but not enough to drag his net worth below a billion dollars. To understand how Donald Trump could be so rich—yet look so poor—it’s essential to comprehend the difference between what we’ll call (a) taxable income and (b) operating income. Taxable income is the amount people tell the Internal Revenue Service they earned, after subtracting a bunch of things like depreciation, interest, past losses and, in Trump’s case, questionable business expenses. Operating income captures the amount businesses make from their standard operations, ignoring a bunch of fancy accounting tricks and financial maneuvers. Many of Donald Trump’s businesses generate a huge amount of operating income, even though his IRS filings reportedly show very little taxable income. That’s important because operating income, not taxable income, is a key factor in determining the value of a real estate asset. Investors want to know how much a building throws off in annual profits. What happens after that on a personal tax return—the level of financial wizardry that a seller might use to make their operating profit look like a loss, and thereby avoid taxes—doesn’t matter much to a potential buyer. “There’s the tax world, and then there’s the real world,” says Eric Anton, a commercial real estate broker in New York City. “They’re totally different.” Trump’s operating income is real and documented, laid out in paperwork from local tax offices, the Securities and Exchange Commission and the president’s business partners. Don’t be fooled: The news is not that the president is broke (the Times story notes that tax returns do not list someone’s net worth). The news, instead, is that Donald Trump seems to have avoided paying much in taxes despite significant operating profits at certain properties. In other words, he figured out how to share very little of his fortune with the country he now leads. Read the full profile on Forbes: https://www.forbes.com/sites/danalexander/2020/09/28/yes-donald-trump-is-still-a-billionaire-that-makes-his-750-tax-payment-even-more-scandalous/#5531f7912885 Subscribe to FORBES: https://www.youtube.com/user/Forbes?sub_confirmation=1 Stay Connected Forbes newsletters: https://newsletters.editorial.forbes.com Forbes on Facebook: http://fb.com/forbes Forbes Video on Twitter: http://www.twitter.com/forbes Forbes Video on Instagram: http://instagram.com/forbes More From Forbes: http://forbes.com Forbes covers the intersection of entrepreneurship, wealth, technology, business and lifestyle with a focus on people and success.