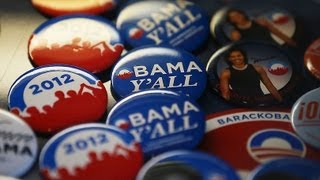 As the national debt finally passes the $16 trillion mark, are Democrats serious about addressing deficit spending? Several Democratic delegates and supporters that Reason TV spoke with at the 2012 Democratic National Convention said that Democrats care deeply about the debt, but when it came to offering solutions, they said that serious reductions in government spending would actually be counterproductice. Instead, many suggested increasing public works spending to stimulate job growth, despite the fact that President Obama's first stimulus still hasn't moved the economy above 8 percent unemployment. They also defended Obama's proposal to raise taxes on anyone earning more than $200,000 a year, even though this won't even come close to closing the annual budget deficit. Approximately 4:00. Produced by Paul Detrick and Zach Weissmueller. Visit http://reason.tv for downloadable versions and subscribe to ReasonTV's YouTube Channel to receive notifications when new material goes live.

Category : Tax Debt
PreviousReceived a Letter From the IRS Regarding Form 944?
NextHow Much Does a Northern Virginia Tax Attorney Charge?