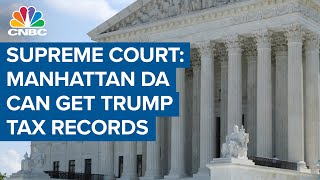 The Supreme Court on Thursday voted 7-2 against President Donald Trump in a case over whether he could shield his tax records from the Manhattan district attorney. CNBC's Eamon Javers reports. For access to live and exclusive video from CNBC subscribe to CNBC PRO: https://cnb.cx/2NGeIvi The Supreme Court on Thursday delivered split opinions in two cases over whether President Donald Trump can shield his tax records from investigators, handing a win to the Manhattan district attorney but rejecting efforts by House Democrats. Both cases were decided 7-2, with Chief Justice John Roberts authoring the court’s opinions and joined in the majority by Justices Ruth Bader Ginsburg, Stephen Breyer, Sonia Sotomayor, Elena Kagan, Brett Kavanaugh and Neil Gorsuch. Justices Clarence Thomas and Samuel Alito dissented in both cases. Both cases are subject to further review by lower courts. The justices rejected the president’s claims that he was immune from state criminal subpoenas in the New York case. In the congressional case, they wiped away rulings in favor of House Democrats, ordering lower courts to more carefully consider concerns about the separation of powers. The mixed rulings mean the American public is unlikely to learn about Trump’s financial records or tax information before November’s election. It is not clear when the lower courts may ultimately resolve the matter. The decisions mark the first time that the nation’s highest court has directly ruled on a matter involving Trump’s personal dealings. Trump has been more secretive with his finances than any president in decades, refusing to release his tax records to the public even as he mounts a bid for reelection. The cases were decided on the final day of the Supreme Court’s term, which began last October and was extended past its typical end-of-June conclusion as a result of precautions taken against the spreading coronavirus. “In our judicial system, ‘the public has a right to every man’s evidence.’ Since the earliest days of the Republic, ‘every man’ has included the President of the United States,” Roberts wrote in the New York case. The New York case stems from an investigation being pursued by Manhattan District Attorney Cy Vance Jr. Vance issued a subpoena to Trump’s longtime accounting firm, Mazars, for a wide variety of Trump’s personal and business records, including tax returns, dating to 2011. Vance’s office is investigating the hush money payments that Trump allegedly facilitated to two women ahead of the 2016 election, though the purpose for his subpoenas is relatively opaque. The women have claimed to have had sexual relationships with the president that he has denied. Vance hasn’t said whether Trump is a suspect in his investigation, and he has not indicated any potential charges. Trump’s attorneys had pushed for an expansive view of presidential immunity in the case. In one lower court hearing in New York, an attorney for the president said Trump would theoretically be immune from investigation even if he shot someone on New York’s Fifth Avenue. During the 2016 campaign, Trump claimed that he could “stand in the middle of Fifth Avenue and shoot somebody and I wouldn’t lose any voters.” In a statement, Vance called Thursday’s decision “a tremendous victory for our nation’s system of justice and its founding principle that no one – not even a president – is above the law.” » Subscribe to CNBC TV: https://cnb.cx/SubscribeCNBCtelevision » Subscribe to CNBC: https://cnb.cx/SubscribeCNBC » Subscribe to CNBC Classic: https://cnb.cx/SubscribeCNBCclassic Turn to CNBC TV for the latest stock market news and analysis. From market futures to live price updates CNBC is the leader in business news worldwide. Connect with CNBC News Online Get the latest news: http://www.cnbc.com/ Follow CNBC on LinkedIn: https://cnb.cx/LinkedInCNBC Follow CNBC News on Facebook: https://cnb.cx/LikeCNBC Follow CNBC News on Twitter: https://cnb.cx/FollowCNBC Follow CNBC News on Instagram: https://cnb.cx/InstagramCNBC #CNBC #CNBCTV

Category : Tax Attorney
PreviousHow to fill out an IRS 1099-MISC Tax Form
Next2018-03-19 Love and the Tax Attorney