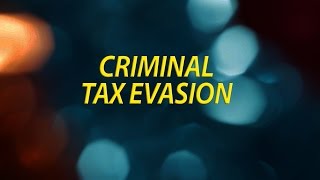 There are all sorts of ways to actually commit one of these crimes Ramifications go way beyond Tax Penalties and Interest (as with the standard civil audit) For many tax evaders, it is not the penalties, additional income tax and interest or even spending some time behind bars that is the worst part of a criminal prosecution. Rather, it is the ensuing shame, public humiliation and social ostracism that is associated with a prosecution that haunts them. Loss of professional License over “act of moral turpitude” Many taxpayers do not realize, until it is too late, that the government publicizes a person’s criminal tax convictions in an attempt to achieve maximum deterrence effect on the rest of society. Historically, people were hung, beheaded, or even burned at the stake publicly to warn citizens who contemplated committing the same crimes as the convicted. Today we do not hang, behead, or burn individuals at the stake. Instead, the government publicizes and broadcasts one’s criminal conviction. The purpose of the criminal tax system, as described in the United States Attorney’s Manual follows: The Government helps to preserve the integrity of this Nation’s self-assessment tax system through vigorous and uniform criminal enforcement of the internal revenue laws. Criminal prosecutions punish tax law violators and deter other persons who would violate those laws. To achieve maximum deterrence, the Government must pursue broad, balanced, and uniform criminal tax enforcement. Broad and balanced enforcement is essential to effectively deter persons of varying economic and vocational status, violators in different geographic areas, and different types of tax law violations. The stakes where Badges of Fraud exists in a taxpayer's fact pattern going into a civil tax audit or CID criminal investigation range from at best, a civil tax fraud penalty, equal to 75% of the additional tax owed as adjusted in the civil tax audit, plus interest on the penalty back to the original filing date of the return being audited. To at worst, up to 5 years in jail, coupled with fines as high as $500,000, plus the costs to the government of prosecuting you for each separate crime and restitution for the tax loss. One fraud is proven – civil side of IRS can open up every tax year to the dawn of time to audit in a separate action from the criminal prosecution at some later date (5 or 6) year statue of limitation for tax crimes… No statute of limitation civilly one fraud is proven) (Go back far enough to capture your net worth) Tax Evasion: The willful attempt in any manner to evade or defeat tax or the payment of such tax. This is punishable by a fine of up to $100,000 in the case of individuals (and up to $500,000 in the case of corporations) or imprisonment up to five years, or both, plus the costs of prosecution. It is also described as a felony per IRC § 7201. Fail to Pay Tax, or File a Return: The willful failure to pay estimated tax, file a tax return, or supply information. Section 7203 calls this a misdemeanor, and it is punishable by a fine of up to $25,000 ($100,000 in the case of corporations), or imprisoned up to one year, or both, plus the costs of prosecution for each occurrence. For example, a non-filer that has not filed a return in 10 years could theoretically (but not commonly) serve a 5/6 year jail sentence. (statue of limitations) Signing A False Return: The willful subscribing (signing) of a return made under penalties of perjury, where the signor does not believe the information is true and correct as to a material matter. IRC §7206(1) describes this as a felony and is punishable by a fine up to $100,000 ($500,000 in the case of corporations) or imprisoned not more than three years or both, plus the costs of prosecution. Employment tax fraud: Employment tax offenses, which are described in IRC § 7204 (fraudulent statement or failure to make statements to employees), IRC § 7205 (fraudulent withholding exemption certificate or failure to supply information), and IRC § 7215 (offenses with respect to collected taxes). Tax Obstruction: One’s attempt to interfere with the administration of the internal revenue laws by “corruptly or by force or threats of force . . . obstructs or impedes or endeavors to obstruct or impede, the due administration of the [tax law],” which is described in IRC § 7212(a), is a felony. It is punishable by a fine up to $5,000, or imprisoned up to 3 years, or both.
Category : Tax Attorney
PreviousIRS 2848 FORM
NextHow To Complete IRS Form 990 (Long)? | ExpressTaxExempt